Introduction of Greek Language Teaching in U.S. Public Schools Is Hopefully in the Offing

The first step for accepting Modern Greek as one of the foreign languages officially sanctioned to be taught in primary and secondary schools in the U.S.A. is being taken this month by the special task force (TF) generated by the Advisory Council on Hellenic Education of the Hellenic Link, Inc (see Bulletin 90). TF, consisting of educators and scholars, will submit, orally present and defend the rationale, value, and methodology of having Greek language instruction in American schools before the American Council of Teaching Foreign Languages (ACTFL), which has its Annual Conference in Boston on November 18-19, 2010. A drafted proposal in support of teaching the Greek language to be presented will be further enriched during the Conference and subsequently attuned for inclusion in the “U.S. National Standards

for Teaching Foreign Languages.” This document, which is being drafted on basic principles promulgated by ACTFL will articulate the expression of the principles in teaching Greek. Many experts, including of course the members of TF, have been asked to contribute ideas and suggestions that will be considered for incorporation in the final “Greek Standards” document. For an insight of our members into the initiated process, we present here an example of the type of documentary material that will be entered in the composition of the “Greek Standards.” It has been contributed by Mrs. Viky Zouka, University Teacher of Greek and an associate of the Hellenic Link Section of Athens:

CHARACTERISTICS AND IDIOSYNCRACIES OF THE GREEK LANGUAGE

Modern Greek is a language with a continuous diachronic presence in the same geographical area from the ancient and classical era up to the present. Contrary to other historical languages, such as Latin, it was never subjected to massive and radically distorting changes, neither did it lose its fundamental homogeneity. Its current form is creatively maintaining characteristics and structures inherited from the past, while at the same time reflecting all the historical, social and political changes that took place in more recent decades. These shape a current linguistic system with three main and unique characteristics, of which any teacher or learner of Modern Greek should be aware:

“Oρθοέπεια” [from ὀρθός (orthos, “correct”) and ἔπος (epos, “word”)] literally means the proper written or spoken formation and expression of linguistic units following a highly specified rule-organized system and refers as much to the linguistic form (spelling and orthography, morphology, syntax, phonetic and phonological accuracy etc.) as to the content and function of those linguistic forms (expression of meanings and concepts, form to function mapping etc.). “Ορθοσήμανσις” means accordingly that form and meaning are primarily linked in a highly descriptive and literal way, promoting linguistic and conceptual accuracy. This feature is easily observed in scientific or technical terminology, but also extended in everyday vocabulary (e.g. “τηλεόραση”, “συμφωνώ”, “ευτυχώς” etc.) at the lexical level and at the morphological and functional level in verbs’ aspect (e.g. θέλω να προσπαθώ vs θέλω να προσπαθήσω). While most other languages mainly employ convention or other means of linguistic economy for the expression of meanings, Modern Greek language diachronically seems to narrow the gap between linguistic expression and mental concepts, or else between language, thought and reality. That is the main reason why the acquisition of such a linguistic system and of the ability to express oneself with the highest possible concision, economy and clarity is considered to be a broader mental exercise, relevant in other areas of life, and not just a foreign language learning process.

Most western languages contain lexical items, roots, prefixes and suffixes of a Greek origin (e.g. analysis, antithesis, hypothesis, economy, method, theory, system, fantasy, idea, ecology, biography, mystery, mania, bible, organization etc.). People all over the world seem to already have some knowledge of Greek –as is also the case with Latin or with English nowadays- without consciously realizing it. This fact has at least two implications, mainly positive ones:

Firstly, lexical knowledge constitutes a fundamental part of our linguistic communicative competence and entails the process and assimilation of complex data in human brain. The basic components of lexical knowledge are traditionally the following:

Based on current SLA theories -and despite their different theoretical perspective on language and language learning- we could reach the conclusion that previous knowledge of some aspects (e.g. meanings and uses) of this complex lexical information reduces the cognitive load of learning the foreign language system they belong to. Familiarity with linguistic items also ensures favorable psychological conditions for learning a foreign language system, because it reduces the students’ subjectively perceived distance between the two languages and cultures (native and foreign one). This “internationality” of Greek facilitates its learning and should be taken advantage of in teaching it as a foreign language, especially in beginners’ courses. However, special caution should be given so as not to create an oversimplified view of the linguistic system in students’ minds.

Secondly, this previous knowledge of -at least some- lexical aspects (meanings and uses, broad morphosyntactic categories etc.) is considered to improve linguistic ability in one’s own native language as well, through the acquisition of conscious / declarative knowledge and metalinguistic information (such as etymology) about forms in his/her mother tongue.

As a direct consequence of historical, political and social developments in Greece, Modern Greek language bears a linguistic diversity attributed to the parallel presence of forms both from “δημοτική” and “καθαρεύουσα” in a lot of cases. These linguistic forms creatively coexist and can be traced in phonology (e.g. φτηνός – φθηνός, δουλεία – δουλειά etc.), in morphology (complex clitic systems with multiple exceptions and irregularities, omission of the verb’s subject etc.), in syntax (relatively free word order with changes based on the sentences’ functional perspective) and particularly in our lexicon (synonyms, homonyms, homographs, idiomatic expressions etc.). This diversity is a source of creative linguistic variety and richness in expressive means or stylistic choices. However, our teaching experience has shown that it is also a cause of considerable learning difficulty or even frustration for students of Modern Greek as a second or foreign language.

We are pleased to bring to the attention of our readers that in response to requests by members, all papers on Hellenic Education contributed to the 15th Annual Conference/Forum of the AFGLC under the auspices of the Advisory Council of the Hellenic Link are now posted and available on the web site of the Hellenic Link. We hope this presentation will enhance public awareness of crucial needs of Hellenic Education in North America, their broad discussion and deliberation as well as a sound educational and productive public- administration decision-making, which could lead to significant improvements in the learning and use of Greek as a second language.

We have received and gladly present the following letter—Announcement/ Invitation—for a remarkable cultural event to take place in New York City later this month:

After a year spent around the four corners of the world, international literary organization The Readers of Homer returns home with a unique all-night audience participation marathon reading of 'The Odyssey' at the venerable 92nd Street Y, on November 27, 2010.

The event will be enhanced with contemporary dance by upcoming Choreo Theatro Company, Ancient Greek melodies by renowned LyrAvlos and visual dimensions, while all proceeds will benefit the national and international programs of The Readers of Homer.

The Odyssey at 92Y has now officially been put under the aegis of the Greek Ministry of Culture, while the venue has been upgraded to 92Y's 900 seat Kaufmann Concert Hall in order to attract an increased number of children, students and adults of diverse backgrounds to this extraordinary journey of poetry, music and contemporary dance.

Considering the commitment of Hellenic Link to the promotion of Hellenic Heritage and Values, we would be grateful if you could share the attached information with your members, so that as many Philhellenes and Homirists as possible have the opportunity to participate as readers or audience members to this unique NY event

Presented by The Readers of Homer at 92nd Street Y

After a year spent on an extraordinary journey to the four corners of the world, the international literary organization The Readers of Homer returns home with a unique all-night event at 92nd Street Y in New York City, on November 27, 2010.

In the splendor of 92Y’s Kaufmann Concert Hall, nourished by Homeric food and wine, hundreds of participants of all ages, backgrounds and nationalities, will gather to read, one after the other, through the night, Homer’s great poem. The pre-assigned segments may be offered in English, ancient or Modern Greek, or in any language of the reader’s choice, while Stanley Lombardo’s English translation will be projected on a giant screen. The marathon reading will open with a brief concert by renowned ancient Greek music ensemble LyrAvlos under the direction of Athenian Panagiotis Stefos, and close, with the rise of the sun, with Four Meditations on War, a musical piece scored for bass-baritone and string quartet, conducted by composer Mark Latham. Throughout the night, the Odyssey will be echoed by contemporary dance pieces performed by Choreo Theatro Company, under the direction of choreographer Irina C. Poulos and set to original music by the Slovenian group Silence.

Magical atmosphere… A night that will not be forgotten any time soon.

The Odyssey presented at 92nd Street Y is under the auspices of the Greek Ministry of Culture, the Consulate General of Greece in New York, the Friends of the Library of Alexandria, Bard College and Fordham College at Rose Hill; and is supported by the Andres Mata Foundation, the Greek Theatre Foundation and Travel Dynamics International (list in development). Ticket prices range from $50 to $150 for audience, students and readers while all proceeds of the event will benefit the national and international programs of The Readers of Homer. Under the direction of Founder Prof. Kathryn Hohlwein and actor/producer Yannis Simonides, and with the support of colleagues worldwide, the Readers of Homer have recently presented universally praised Homeric celebrations in the USA, Egypt, Uruguay, Greece, Italy and Turkey, and seek support in order to respond to an increasing number of invitations from around the globe (see telling pictures in pages 7-8).

in collaboration with the Federation of Hellenic Societies

of Greater New York and the Hellenic Link, Inc.

Is pleased to Introduce to the Hellenic American Community the

You are cordially invited to attend

Professionals and students in every discipline or field of endeavor, whether of Greek Descent or Philhellenes, are cordially invited to join the Hellenic Link, Inc. as members. It is quite easy and useful! Just contact us at any of the indicated addresses

OF HELLENES AND PHILHELLENES

Pictures from the World Tour of the Readers of Homer 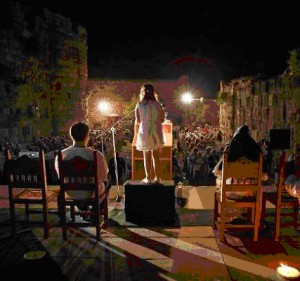 1. The Readers of Homer at the Medieval Castle of Kos, August 2010 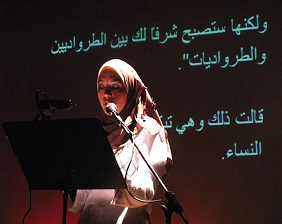 2. A student reads Homer in Arabic at the Library of Alexandria 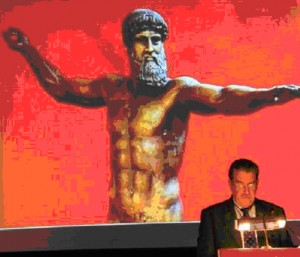 3. In Montevideo, the Ambassador of Italy reads the Odyssey in Italian and Greek